Back in business. A good all-round performance from the u15s against a much improved Leicester side.

Despite missing 4 players the u15s got back on track to go top of the league today, it was always going be a tough affair after Leicester had a convincing win the week before.

The game started evenly with both sides probing looking for the opening goal with Leicester getting the breakthrough. Rugby reacted well & kept pressing to get back on terms with Flick getting the equaliser, Rugby grew in confidence. Leicester were holding a high defensive line, Flick & Chloe were getting through at will leading to flick grabbing 2 more goals.

The 4th goal for Rugby Town came from a corner which the former Leicester keeper picked up forgetting she was now a defender, PENALTY to Rugby for Flick to bag her 4th. Leicester did pull a goal back after winning the ball from a goal kick & finishing well.

Rugby were up for it now & got there the 5th goal after an excellent pass from Kerri playing flick through to score. Halftime 5-2.

The 2nd half was a lot closer with Leicester pushing Rugby back but Rugby withheld & were getting around the back of the defence at will, Rugby went further ahead with Flick scoring her 6th goal & Leicester scoring an additional 2.

Rugby’s 7th goal came from an excellent free kick by Flick which was headed on & superbly finished on the half volley by Kacie. Flick scored another superb goal & Chloe added one with a fine finish at the back post.

It was really pleasing to see Sophie, Tasha and Megan all settling in & the whole team developing, we have had a lot of injuries but we are working hard as a group & this is now showing on the pitch.

I am really proud of you all!! 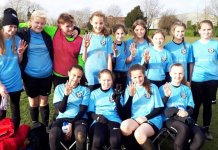 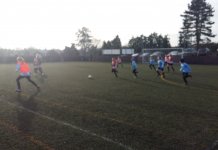 Rugby Town Girls U10 vs. Birstall United U11