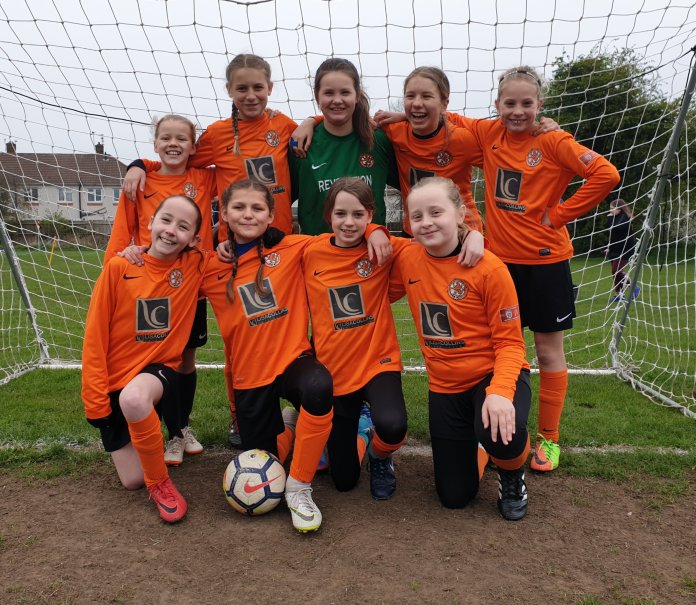 Sponsored by Intelligent Financial Advisory (IFA).
U11 League Cup Final
Leicester City 2 v 0 Rugby Town
Rugby Town came across a strong and determined Leicester City in the League Cup Final on Sunday at Mountsorrel. The opening exchanges were all about stopping the Leicester attacks as they took control of the game from the outset. Their route one football had the Rugby defence in all sorts of trouble and it was from one of these through balls down the middle that their forward wriggled past two Rugby defenders to strike home the early advantage. 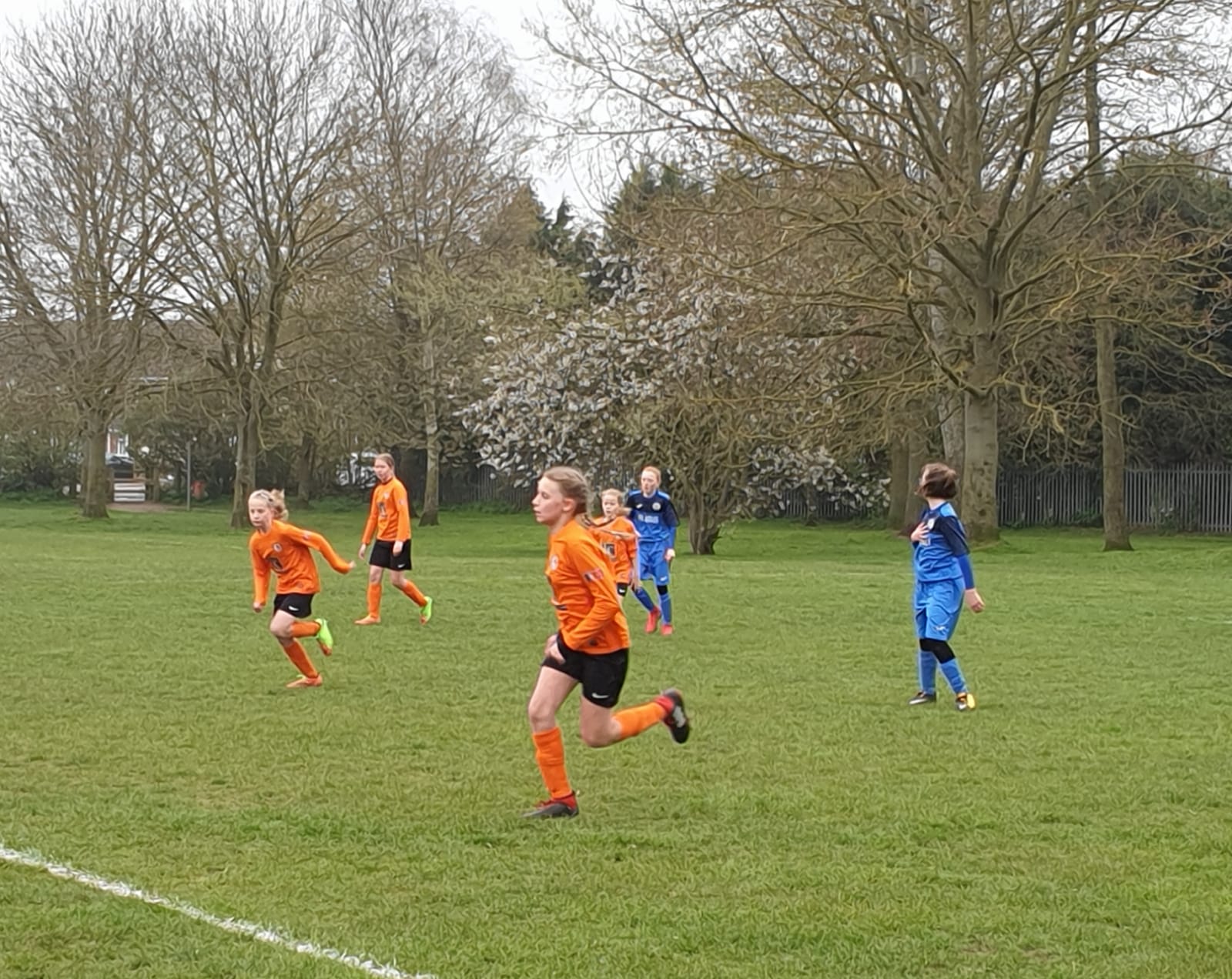 The goal brought Rugby to life and they started to get themselves back into the game with Melissa having a couple of chances which went wide and Jasmine firing past the post. The Rugby midfield of Jasmine, Madi, Lila and Holly were finding it difficult to compete with the Leicester tactics and were quite often finding themselves second to the ball as it bobbled about on a very uneven pitch which was showing every sign of it being used week in week out with little sign of recovery. However, it was the same for both teams and from a Rugby corner, the ball was dispatched out of the Leicester defence and once again the high ball was not dealt with by the defence and the Leicester forward found herself in the clear to make it two nil. Rugby were now desperate to get themselves back into the game, but they were finding it difficult to break down a very tough and sometimes over physical Leicester defence who were ably backed by some very good goalkeeping. 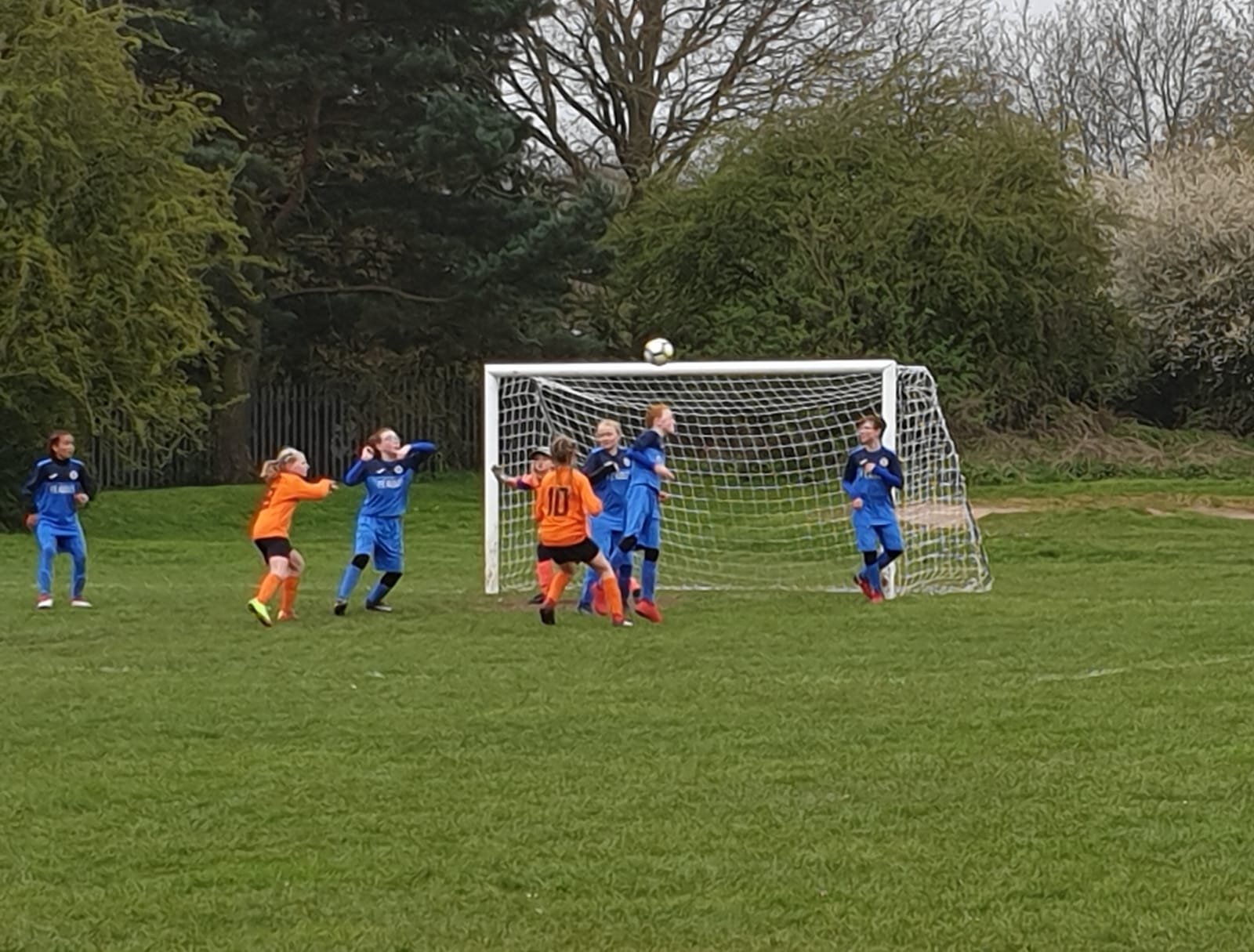 The second half was much better from a Rugby point of view and Jenna, Rosie, Marley and Katie were now more aware of the threats from the long throw ins and high balls being delivered by the Leicester team. Marley was also making inroads from defence as an attacking force but once again the passing game we have all been accustomed to was very much lacking the killer ball. The game was now more even and although Leicester had a goal disallowed which went straight in from a throw in, the girls were making more of a fight of it. 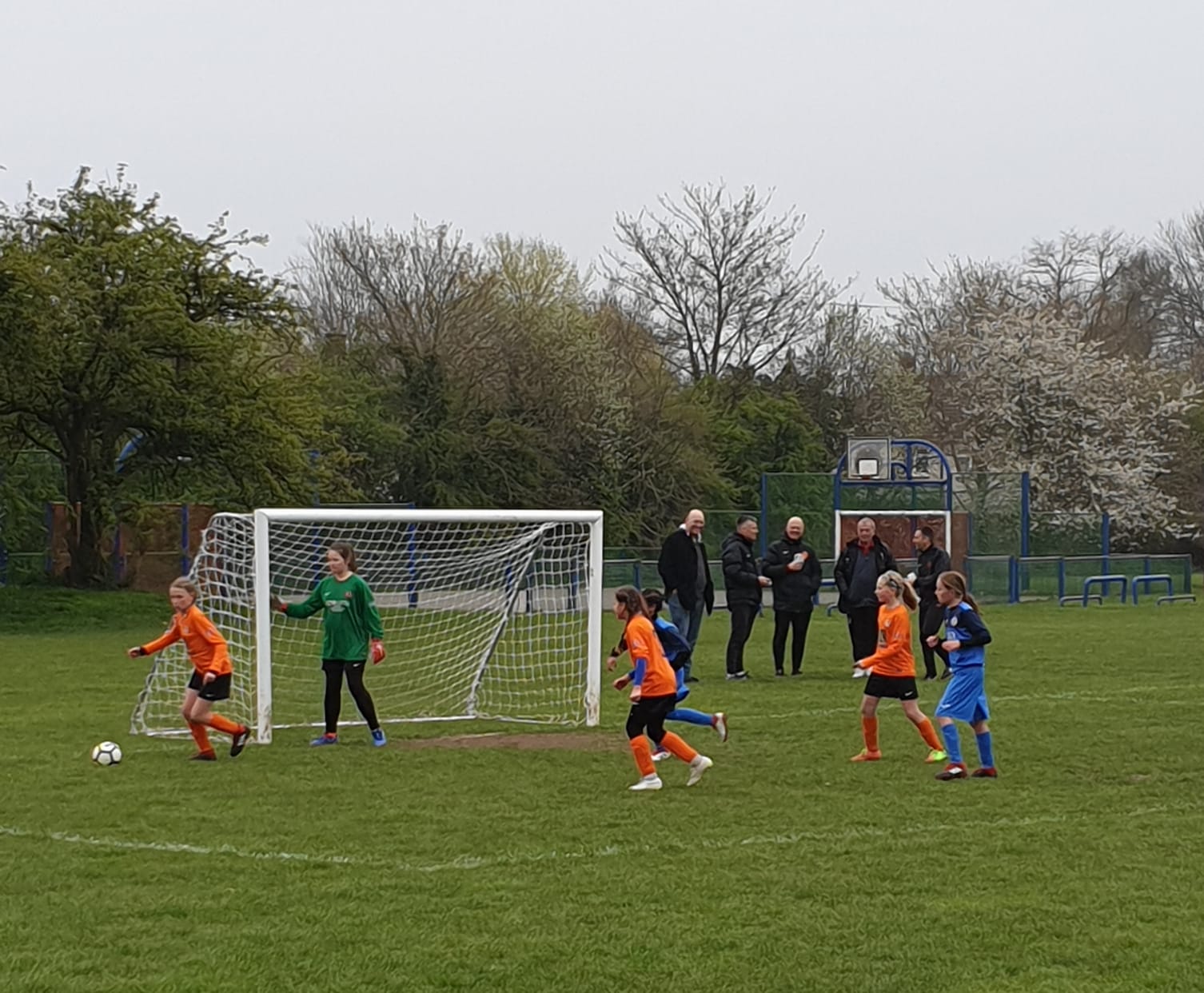 Then with around seven minutes to go, Madi found herself in a good position in the Leicester penalty area after going around 2 defenders only for a tackle to take her down and leave her in a heap on the floor for a clear penalty. Unfortunately, Madi had to be helped off the pitch with an ankle injury, Holly came on in her place and when play resumed Jasmine had the ball ready in her hands to place the penalty but was instructed by the referee to kick it back to the keeper for a goal kick and not a penalty which could have turned the game, but the girls respected the refs decision and got on with the game. There were a few more chances created before the final whistle was blown but Rugby could not get a goal back. 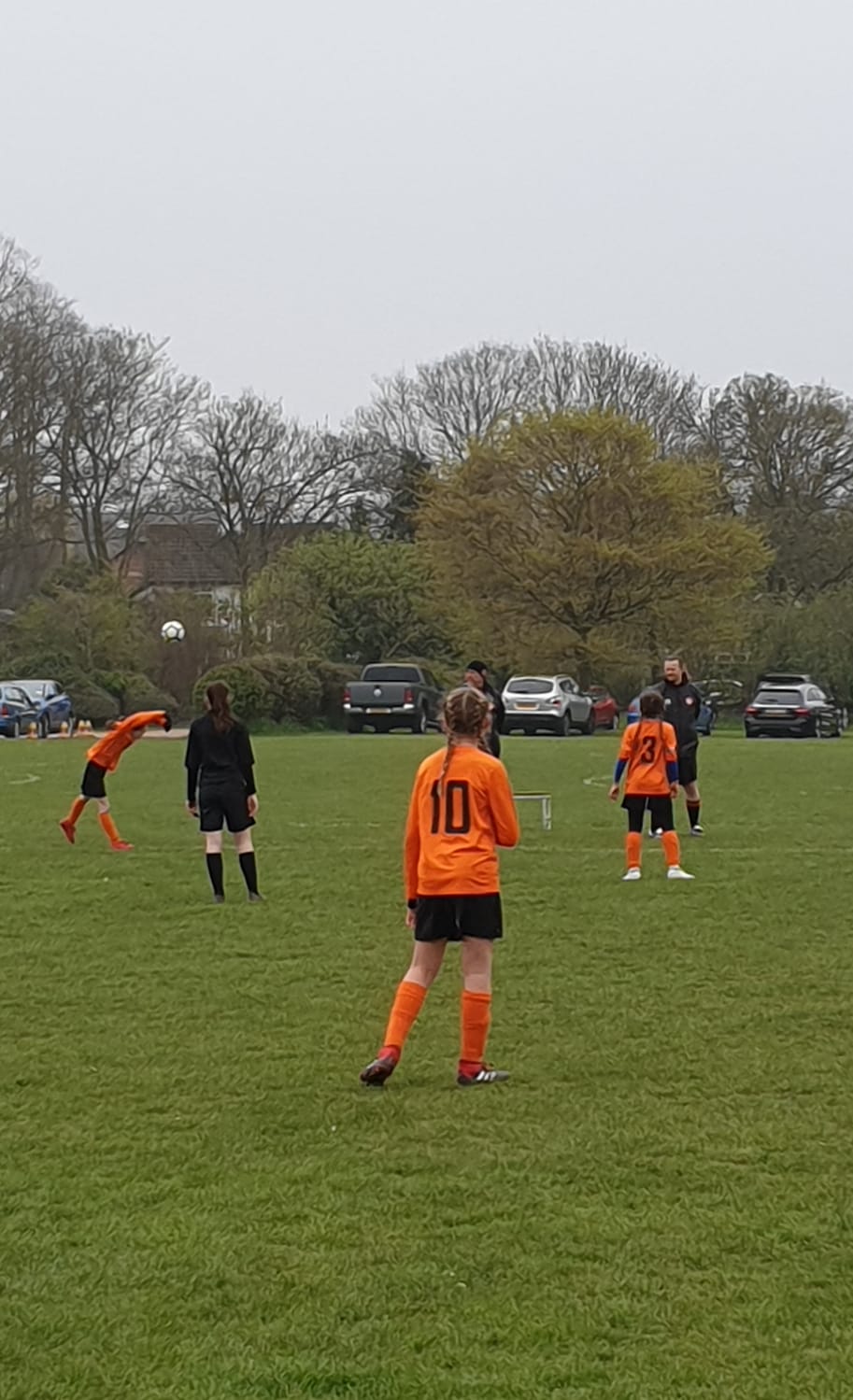 A really good effort from the girls but they were outfought on the day by a much stronger, fitter and a well drilled Leicester City side who deserved to take the Cup home which Rugby won last year. 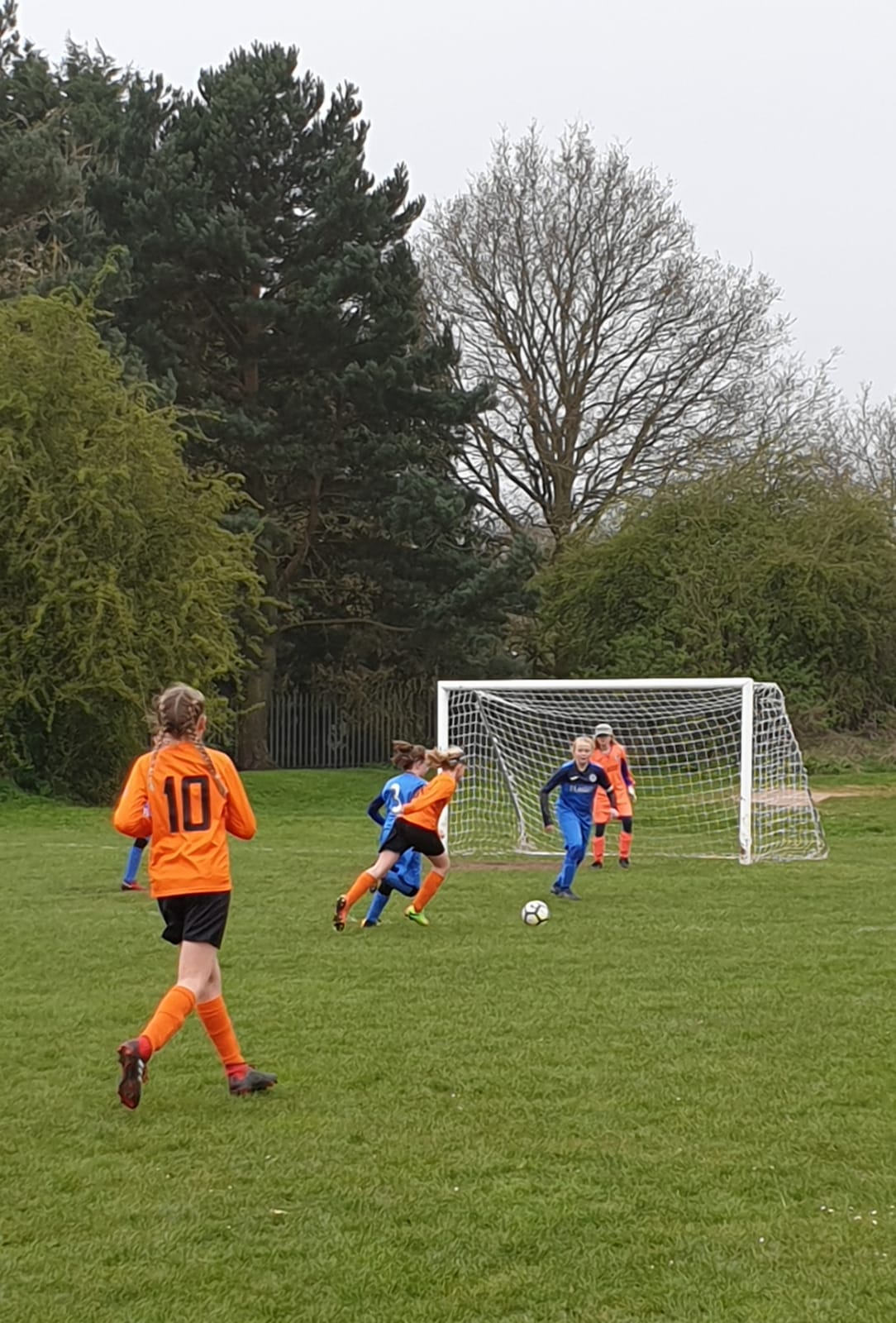 Leicester City are definitely one of next years teams to watch and we take a lot of positives away from the game knowing which areas we need to work on in training for next years 9v9 format.
Thanks to Kelly for the pics