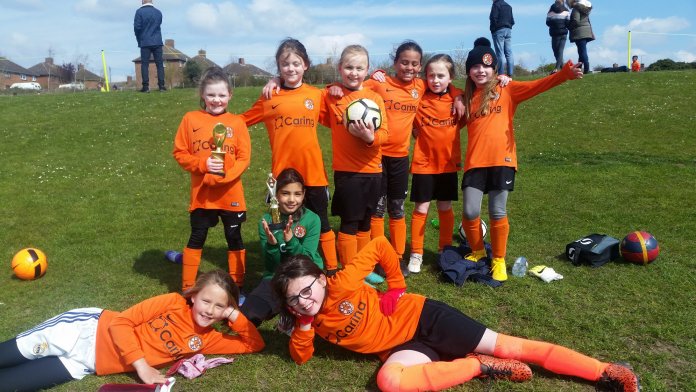 The Under 9’s were at home today against an Asfordby side who haven’t lost for over a year and recently won the league cup – expectations were limited but the girls gave a fantastic account of themselves with a number of the squad missing due to the Easter holidays. Captain Ria started in goal against the experienced, strong opposition but it turned out to be an evenly matched contest which could have gone either way.

Connie and Isobel started the game in their usual defensive partnership and both did well to keep Asfordby at bay – Connie showed composure on the ball and her customary intelligence in her positioning and awareness. Isobel got stuck in across the pitch and made some important crunching tackles and big clearances throughout. Ria collected the ball well and bravely got down to save countless Asfordby shots, smothering the ball to keep Rugby in the game.

Poppy and Aurora began the game in midfield and both girls showed great energy to get up and down the pitch, supporting Sofia up front whilst also protecting the defence. Katie and Izzy both came on for spells in defence and midfield, injecting some fresh energy and fighting spirit to the Rugby team, but it was the away side who took the load midway through the first half.

Sofia once again showed her competitive spirit, putting pressure on the Asfordby defence and never giving them time on the ball – Rugby’s star striker was rewarded with a well-taken goal to put the girls back in the game and their confidence and belief grew as the first-half continued. Beth deputised up front and was unlucky not to end up on the scoresheet, having held the ball up well and got herself into some fantastic goalscoring positions.

The first-half was closely fought and evenly matched with both sides having chances, playing free-flowing football and looking dangerous going forward. Aurora and Poppy showed once again how easily they can pass through the opposition’s midfield with their pace and skill on the ball whilst Connie and Isobel in defence had to be alert and look lively to the constant threat posed by Asfordby’s talented front players.

Half-time saw a few positional changes to keep the Rugby legs fresh – Katie showed her usual strength and determination to fight for every ball and Izzy made some brave challenges whilst also managing to get forward and support the attack. Sofia’s commitment paid off when another great finish ended up in the Asfordby net but it was the away team who came out on top in the end with a couple of late goals.

Nonetheless the girls did incredibly well to fight until the end against unbeaten opposition of the highest calibre; they were a credit to themselves and the match could have gone either way – it was an exciting game with chances at either end, closely fought and evenly contested. They should take confidence from the game, recognise that they can beat any side on their day and be extremely proud of themselves and their performance.

Thank you to Kane for stepping in to coach whilst I was on referee duty and to Jason (Katherine) for washing the kit! Thank you to all the parents for your continued support, enjoy a lie in next Sunday before the girls’ last match of the season on the 28th!

Parents’ Player of the Match: Another great performance from Connie who showed great positional sense, bravery and commitment in the Rugby defence.

Coaches Player of the Match: Ria made a series of fantastic saves, getting down well to collect the ball and keep Asfordby out. Well done to all of the girls!