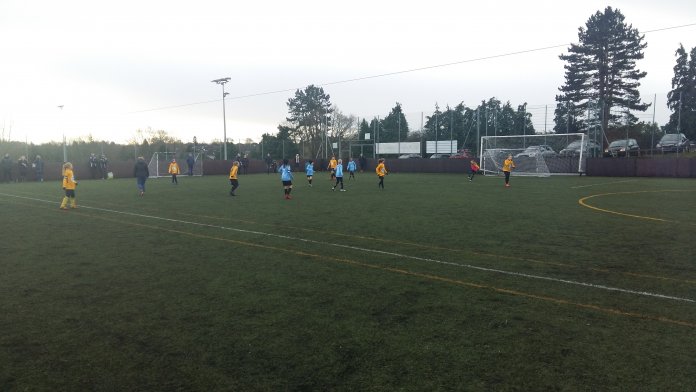 Rugby Town Girls U10 vs. East Goscote United U10

A smaller than usual squad of ten Rugby Town Girls arrived at Butlin Road to take on a talented East Goscote side; the sun was shining and the conditions were fantastic on the 3G so we were set up for an exciting spectacle. As it turned out Rugby put on one of their best performances to date and every single one of the girls contributed enormously to a fine all-round display.

With regular goalkeeper Ria away, Layla volunteered to go between the posts and did a fantastic job once again – bravely gathering the ball in her area and distributing the ball out wide excellently. After a player of the match performance last week Connie started the game in defence and was exceptional once again, reading the game impressively and making some important interceptions.

Rugby started the game on the front foot and played some astonishing football from the outset; one pass from Lexie to Sofia in particular stands out – fantastic vision to cut the defence in half, combined with incredible movement and a well-timed run to finish off a great team move.  After a nervy start Rugby settled into the match and the game was beyond the reach of East Goscote inside 15 minutes.

Captain Isobel started the game on the wing and showed great confidence on the ball, getting forward and releasing it well to put Rugby in scoring positions; her determination also paid off on a number of occasions as she battled to win the ball back. Lexie covered every inch of the pitch in central midfield and was instrumental in starting and finishing numerous Rugby moves; her natural competitiveness and skill on the ball is a real asset.

Izzy looked assured leading the defence throughout; bravely making well timed tackles and demonstrating her leadership and communication skills to make sure no one went unmarked and everyone knew what the plan was. Aurora’s energy showed no limits on the other wing, her fitness is a key advantage for Rugby as she gets up and down the pitch relentlessly – never afraid to get stuck in at one end whilst finding herself in scoring positions at the other.

Sofia led the line for Rugby in the first half and displayed her usual clinical finishing, great running off the ball and tireless determination in chasing down the East Goscote defence. The away side had found a way back into the game with a fantastic long-range effort and Rugby had to dig deep to maintain their advantage in the second half. Beth came on to shore up the Rugby defence and did a fantastic job, using her strength and determination to outmuscle the opposition whilst always playing it safe at the back.

Indie injected some new energy into the attack, using her pace and determination to break up play and put Rugby back on the front foot – she showed 100% commitment in every challenge and laid the ball off well. Katie was also instrumental in the middle of the park today, showing fantastic energy to get from one end of the pitch to the other and battling for every loose ball. Rugby always looked in control of the match and it was a wonderful team performance throughout – well done to all the girls involved!

Parents’ Player of the Match: Izzy put in a strong, consistent performance in the Rugby defence; looking assured at all times and showed fantastic leadership skills

Coaches Player of the Match: Lexie was instrumental in central midfield, controlling play with her fantastic distribution of the ball and determination chasing back