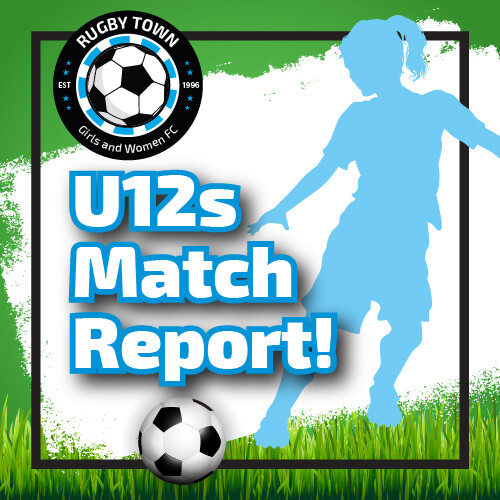 Brackley Town kick off and get a quick start but Emma clears and Brackley Town get a throw in. It’s misjudged and Lily makes an early save.

Rugby Town are now on the charge with Zara and Rosie, but Zara accidentally loses the ball and it comes off the opposition. Rosie throws to Evelyn down the wing, who passes to Skye but she shoots straight at the goalkeeper.
10 minutes gone and the girls are playing well. A lot of defence work being carried out by Lois, Emma and Carly, but Rugby Town’s attack were caught offside a few times during the game, still trying to get used to it.

Rugby Town are back on the attack again, this time it’s Evelyn and Rosie, who passes to a Rugby forward who crashes it into the net – 1-0 to Rugby.

Brackley Town kick off passing it to one another and trying to chase down Rugby’s defence, but Ava is too strong and assists Lily who comes out and saves! Lily kicks out to Emma who had Rosie up the wing on attack with Evelyn in the middle but loses control to Brackley. They are posing a threat to our goalkeeper who puts in so much effort and determination. Lily is on fire today!

With only 10 minutes to go before half time, both teams were putting pressure on each other. Brackley Town were winning several corners as Rugby’s defence were clearing out and keeping the pressure on them, not allowing them to score. At this point, Lily is commanding her area and making several saves, she is quick on the ball and is showing excellent handling.

In the final few minutes, Lily kicks out to CM where Zara is on hand to feed the ball to Skye who passes to Evelyn who makes a shot on goal and scores, 2-0 Rugby Town. Great Link up between Skye, Zara and Evelyn who were maintaining their positive attitude and didn’t give up.

Rugby on the attack again, this time Skye has the ball but her shot is cleared by the goalkeeper only as far as Zara, who passes to Rosie. She takes a shot but it goes just wide!

Rugby town kick off but lose the ball early on, Brackley are on the attack but Carly clears. In the space of a few minutes Brackley were awarded several corners with Rugby heading them clear. The defence were working well together showing confidence and determination, a big improvement from the last game. On separate occasions Brackley had possession in the Rugby half but it was cleared away by Zara and Ava.

5 minutes gone Rugby were not letting Brackley get the better of them – Zara has the ball who passes the ball to Skye down the left side, takes on their defence, has a shot on goal which is a belter and goes in the top right hand corner 3-0 Rugby Town. No cartwheel from Skye this week!

Brackley were still being very dominant in attack but Lily was just too much for them, making some impressive saves. Brackley and Rugby were both showing determination in their attacking halves but both goalkeeper’s were focused and stayed strong.

Rugby on the attack again with Skye, Ava and Rosie. Rosie has control and takes on the big right back, she plays in a pass that is met by the forward who coolly slots home – Rugby Town go 4-0 up. They were controlling the game and positioned themselves together when they needed the ball to not allow Brackley into the game. Rugby’s midfield comprising of Zara and Rosie maintained their positions followed closely by Skye and Evelyn who were pressing Brackley’s defence down – Another goal for Rugby Town makes it 5-0.

In the final 10 minutes Brackley had most of the possession in their half but the defence comprising of Lois, Emma and Carly were doing their best for a clean sheet. Brackley force shot on goal that hits the post and goes wide. Lily clears out into our half but Skye pushes Brackley’s defence and concedes a free kick. The kick is taken and with Brackley on the attack, the Rugby defence slips and allows them to shoot and it goes through Lily’s legs, 5-1 Rugby Town.

With minutes left to play, both teams were standing strong and not letting their guard slip. The ball was being passed to one another in the centre of the pitch which no one could clear. Final whistle blows, Rugby Town win 5-1.

Coaches Player of the match: Emma for her commanding defensive performance.

Parents Player of the match: Lily for her tremendous and impressive goalkeeping!

Many thanks to Leah for running the line.